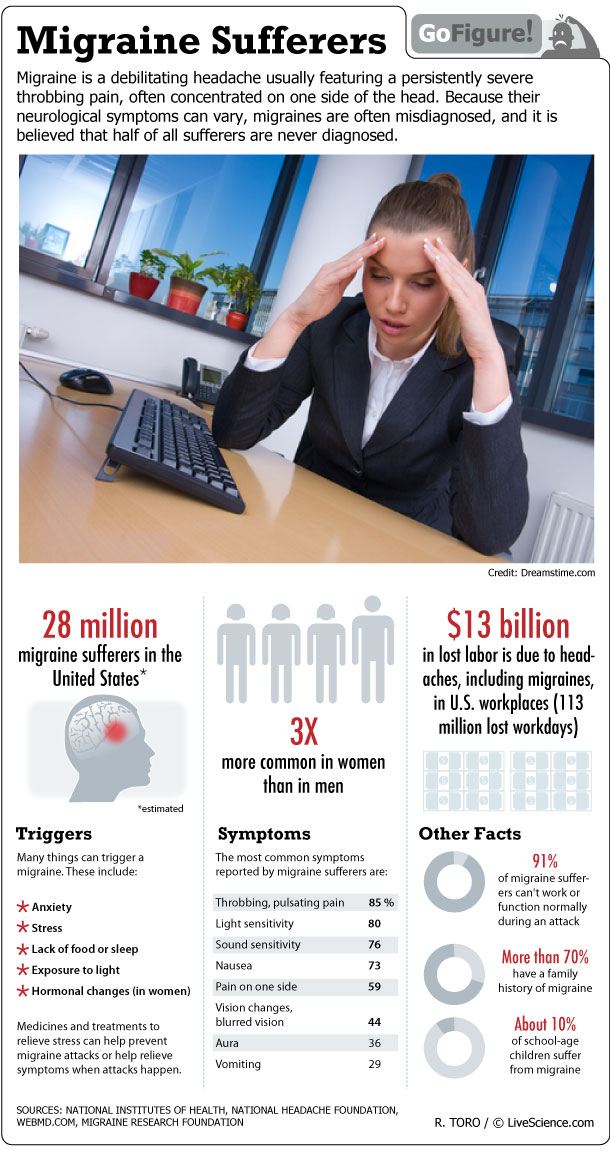 This infographic just barely touches on the idea that foods may impact migraines, but it doesn’t really go into what foods may help prevent migraines or which foods may trigger or make migraines worse.

But if you are a migraine sufferer, you may have noticed a correlation between the foods you eat and migraines.

Inflammation in the body and the nerves can lead to migraines.

Inflammatory foods increase levels of cytokines which sets off a waterfall effect of reactions leading to inflammation and migraines.

So what foods trigger inflammation?

While exact triggers differ from person to person there are a few common triggers to avoid.

Amines can also be found in foods, especially meats, that have been in the fridge for a few days.

Very ripe bananas and avocados are sources of amines as well.

Although caffeine may initially help prevent the onset of a migraine, when the caffeine is out of your system the body goes through withdrawal which can trigger a migraine.

Alcohol– on top of being fermented, alcohol is dehydrating. Dehydration is a common trigger for migraines.

Citrus fruits, dairy, food additives and preservatives like sulfites, MSG, artificial sweeteners and nitrites can all trigger migraines as well- be aware of processed meats, dried fruits and anything that’s been smoked, pickled or cured.

Avoiding these common triggers and reading ingredient labels may help you to avoid migraines.

One big problem with migraine trigger foods is that they can be tricky to pin down. Often they can be dose dependent or delayed, so identifying them can be a challenge.

Elimination diets may help, but in most cases, they are “one size fits all” diets that don’t help identify the problem. If you are having trouble identifying triggers and want some help building a personalized diet protocol to eliminate foods based on your own sensitivities you may want to consider the LEAP protocol.

Not all migraines are triggered by foods, other common triggers include magnesium and/or riboflavin deficiency,  dehydration, low blood sugar, not eating enough and a variety of environmental factors.

Science based nutrition tips straight to your in-box!